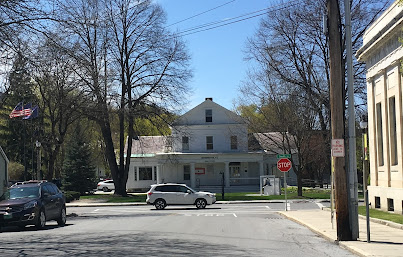 Now that the leaves are off the trees, pause on Union Street, look toward South Street and admire the Root House that was set  right there for you to see.

Today this is Bennington's Town Offices.

The house was built for the Roots' family. Elisha and Betsy Root had come to Bennington in 1833. Their son, Henry Green Root, a tin smith, had joined with Luther Graves, a peddler, to make and market tin goods. The Root family lived here until the 1920's when they gave their house to the Town. 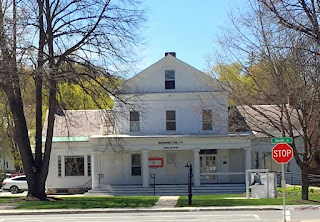 When it was built in the 1840's it was the latest style.  Facing the gable end of the house to the street was the new way; so were the wings. English gentlemen had country houses like this. So did successful merchants in the Mid-Atlantic states.

Now the style had come to Bennington.  Copying the solid rectangular shape, the strong moldings, and columns of Greece temples was all the rage.

These photographs, each bringing the viewer closer to the house, help show how a visitor approaching on foot or in a carriage would have perceived the house - not as we see it today in one photograph or passing by in a vehicle. 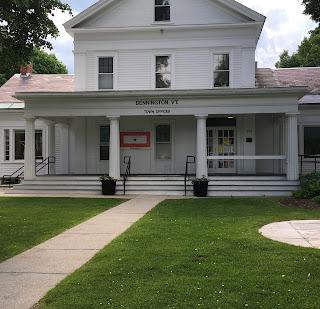 Setting the house back from the street away from the hustle of the town, was also the latest style. It  presented the house within a vista. A visitor needed to approach the house deliberately, not just  happen by.

The veranda - the name used for a porch in the 1840's - helped. It was a platform: showing off the house.

It also was a place to see and be seen. It spoke of a family who had leisure time to spend on that porch.
The windows which looked onto the veranda came to the floor - you could walk through them. The house became porous, not just protection from the elements. In the winter the windows would have interior shutters and drapes and the newest heating system, cast iron stoves, for warmth.

The large, fluted, and slightly tapered columns with simple capitals copied those of Greek temples.
They were not cut from one tree, but assembled from many planed and carved boards.

Columns in early Bennington buildings, for example: The Old First Church, 1805, and the Norton-Fenton House, 1836, were trees. 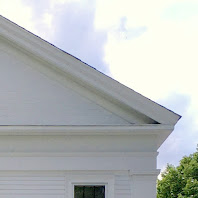 The gable triangle, emphasized by moldings reminded the viewers of a classic Greek pediment. The flat boards -  set side by side, not lapped as clapboards are  -  referenced the stone walls of  Greek temples The boards were probably made smooth by a water powered planing machine, not by hand. What a time saver that would have been!

The columns and the flat boards required newly emerging technologies that Bennington embraced. 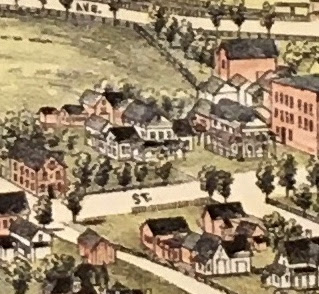 The house - seen here in the center of the colorized 1887 Bird's Eye View map of Bennington - had barns and out buildings. One - on the left at the corner of South and Elm Streets - had begun as the Root and Graves' company workshop. It is now Bennington's Welcome Center.

To the right is the house that is now used for Harvest Brewing and a restaurant and then the brick wall of Jay's Art Shop and Frame Gallery.

Mary Root Mollica once told me that when she was a child her Morgan horse was stabled in one of the barns.