The Miller's Toll - How it was built


I wrote about the  history of The Miller's Toll Restaurant on Main St. in Bennington here: https://passingbyjgr.blogspot.com/2017/01/the-vermont-steak-house-was-cigar.html 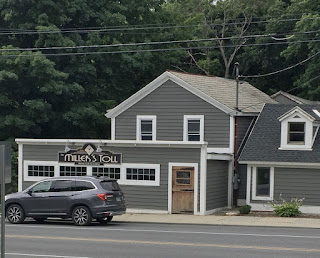 All the good framing that I was fortunate to see is now hidden again as the renovations are completed. Invisible. Behind siding, insulation, interior walls, new paint. 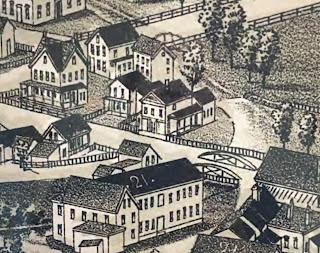 I can't say,"Next time you're there look at this!"  Instead this post answers the questions I get: "That old? How to do you know? What are you looking at?"

I started checking Bennington's old maps, seeing if they show the house. They do.

Here is a small part of the 1877 Bird's Eye View map of Bennington.

In the middle, beside the Walloomsac River,  above and left  of the bridge, is the house.
It is a 2 story house with a back wing and a porch on 2 sides. There are 3 windows on the second floor in the front and a chimney in the middle. 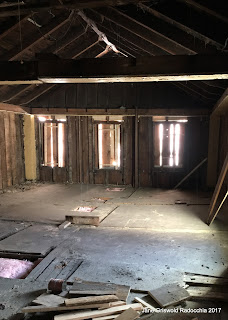 This is  what the 2nd floor looked like 3 years ago.

The 3 windows seen on the map are still there.
The roof still has the same pitch with the gable facing the street.
The bunch of wood in the  photograph in the middle of the floor - where the surface changes -  covers the hole where the chimney was. 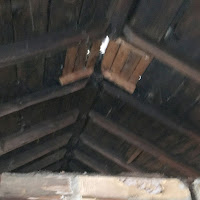 The hole in the roof for the chimney is now patched. It is right where the map placed it.

The gable faces the street. That was the 'new' way to build in the 1830's.  The house is at least that old.

The 1835 Hinsdill Map of Bennington has dot in this spot.*
Is this house that dot?  Yes.   Here is how I can tell.

I think this is fun so I like sharing it.
If you don't, thanks for reading this far 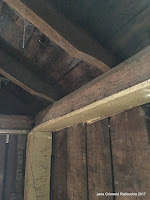 The ridge beam, running down the middle of the picture, has 5 sides. It was once a tree, cut to this shape, and notched to catch the rafters. Ridge beams with 5 sides were standard in Bennington houses from about 1765 to about 1850.

Notice that the roof sheathing is  wide boards with vane. 'Vane' is the edge of the tree. The boards were not trimmed, but used as they were sliced off the log by the saw.
The frame, painted here in the photo, is typical of New England post and beam, timber frame construction.
The square posts support beams connected with mortise and tenon joints held together with wooden pegs.

Here the frame is exposed and painted. By the1830's the beams would have been hidden in the wall, and ceiling.  The lath (see the photo below) would have covered the posts and beams as well as the exterior sheathing.

The walls have no studs. Instead planks sit side by side.  Bennington had lots of wood and saw blades to cut them into wide panels. The intermediate studs we had earlier used in the post and beam frame gave way to plank walls.
Those planks  were cut at Safford's saw mill located just across the Walloomsac River.
This is reasonably common here in the Tri-State area. Sometimes it can be found in houses in western NY and Ohio. That indicates that a framer trained here took his skills with him when he moved west. 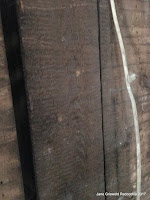 The mill used a sash saw with a saw blade that went up and down. It left marks on the boards which are still visible today. Later circular saws left curved marks. Those saws were in the area by the 1840's.
In the photograph the left side shows the saw marks.

On the right side are the light and dark marks left from where lath was nailed on for plaster. The uneven lines mean that the lath was 'split'  - make from  boards. Later lath is cut in uniform widths instead of being split.

For a more technical discussion you can read my blog post here: https://www.jgrarchitect.com/2020/07/the-millers-toll-bennington-vt-its.html

* Prints of the Hinsdill Map are in the Bennington Museum Research Library as well as several books on Bennington and Vermont.