In 2011, Joe Hall and I wrote an article for The Walloomsack Review, the journal of the Bennington Museum, about William Bull. Joe had done the research: I was asked to write about the architecture.  I have described the architecture with more nuance here.

William C. Bull had a good job.
He owned a successful box manufacturing company on East Main St. in Bennington.

Still in 1891, at the age of 31, he began to design buildings - houses, churches, the Bennington train station - that still delight us today.

Bull left us no diaries or letters, few records - only his buildings. They tell us he enjoyed designing, playing with form and surface. He had a sense of place (how the building would fit the land) and massing (how the parts would fit together to appeal to us). He made memorable spaces for people to use and live in.

He built in a time when people walked, or traveled by horse and wagon, by trolley, and by early cars that didn’t go very fast. At that pace there was plenty of time to look around. So his buildings engage you. 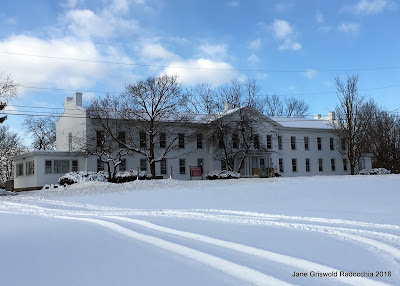 One of the last and simplest buildings  Bull designed, in 1914, was the Town Poor Farm on Willow Road.
It is placed to be seen from a distance. In the early 1900's
Willow Road connected East Road to Northside Drive and Rte 7a.  A traveler coming into town would see this building on the ridge across the valley, graceful and quiet on the land - simple but not poor or miserly.

Replacing a building which had burned down, it was built of concrete, a relatively new construction system. Today the concrete walls are sheathed in vinyl siding. 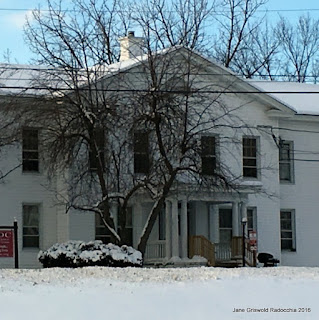 The building is very long. Here Bull played with the massing - divided the structure into parts - to create a dignified whole: a beginning (the entrance), a middle (the wings), and an end (the 2 chimney walls on either end).
He placed a traditional farm house  shape in the center with a large center entrance, a porch with triple columns, balanced windows each side. He placed that farm house a few feet in front of the wings and turned the roof so that the house was set off before  the north and south wings.

This helped make the scale of the farm more personal, less intimidating, human. 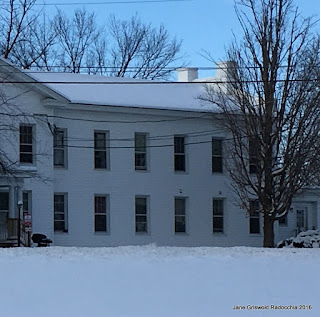 The windows in both wings are large and well proportioned - not skimpy or mean.

Large windows were also necessary to provide day lighting before we had reliable electricity. 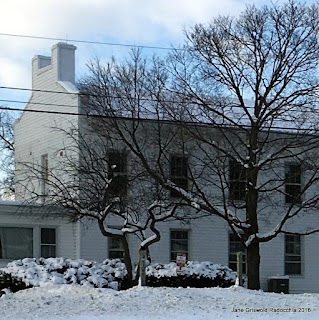 The high end walls act as visual book ends, holding the rows of windows in place, anchoring the whole building to the land.  They give the building 'weight', importance.
The end walls also simplified the slate roof details - slate was the standard roofing of the time -  and enclosed the chimneys. .


There are no frills here. The character is from the size and scale of the parts: the wall and roof height, the window proportions, the shapes of the parts put together.
The Town was graced with a building which did not look down upon its poor.


Today this is  the home of BROC, housing its offices and apartments.
It is best seen from Rte 7 just north of the intersection with 67A and Kocher Drive. 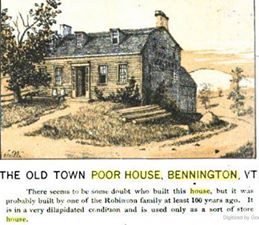 Thank you for your post. This is excellent information. It is amazing and wonderful to visit your site.
upvc sliding door dealers
upvc sliding windows manufacturers in hyderabad